Why men do not cuddle with other men 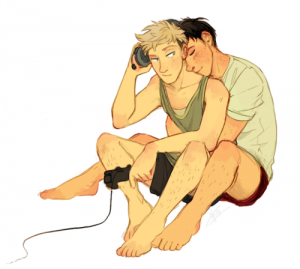 Since time immemorial, men have been told that cuddling is for ‘wusses’ and ‘weak’ men (transliterated to reflect modern vernacular). In fact, so deep-seated is this belief that for most of the 20th century, at least, most men have eschewed the very concept of cuddling other men for fear of being thought of as effeminate or overtly ‘feminine.’

Here, the very concept of cuddling stems from the mother figure, i.e. the mother breastfeeding her baby, cuddling the infant and hugging the child to sleep. Since these are all intrinsically matriarchal actions, men were ‘taught’ from an early age, to appear more ‘manly’ by rejecting such ‘non-masculine’ acts.

Public and private displays of affection in-between men have traditionally been restricted to a quick and cordial handshake or a fist bump, at most.  And this has been the norm for centuries even as gender roles have steadily solidified over the years.

Peers, Language and Vernacular as a Barrier

It is not that they do not ‘want’ to cuddle, rather their lack of physical intimacy with each other has more to do with being judged by their fellow peers.

In the locker room, men who may commence cuddling can quickly be labelled with homophobic slurs such as ‘faggot’ and the like.  This is a direct impingement of their own masculinity, and they feel sufficiently threatened, to effectively refuse any and all physical contact with members of their own gender, as a means of protecting the prevailing social norms viz-a-viz manhood in general.

As time passes, such adolescent experiences can end up being solidified into basic beliefs around which they base their own concept of physical intimacy. With cuddling with members of their gender being the single biggest taboo possible.

However, as of today, times have changed, and a comparatively more permissive culture has come to the fore.

Recent studies have indicated that men are not as averse to cuddling other men as had been previously thought.

Rather as the bonds of social conditioning with respect to rigid gender roles have softened so too, have men’s opinions when it comes to cuddling with their own gender.

This in part has a lot to do with the increasing acceptance of homosexuality in contemporary 21st-century society.

The acceptance of homosexual marriages has also liberated even heterosexual men from upholding their rigid masculine stereotypes.

Today’s man is now far more comfortable not being ‘labelled’ than at any time before in history.

So, go right ahead and cuddle your bestie. He might appreciate you all the more for it.