Years ago, I was in a bad way. My relationship at the time left me feeling lonely in a room full of people. You always hear about single people wanting to be with someone. Some people, being with them doesn’t fill that void you felt when you were single.

It was only years later when I realized that relationship was not only a mentally abusive one but one of skin-hunger. He worked odd hours often going out of town, but even when he was in town, I longed for the feeling of being held, of being loved and desired.

I had a few friends. One or two of them came over often enough they practically lived with us. I learned to depend on them for the sense of companionship that comes with a long term relationship. Even if my partner was not around, I had them, and that would be okay until he got home.

When he was home though, it wasn’t much different. I would beg to be touched, often confusing sex with the desire to be held and needed. Cuddling was not something he would do, so it never occurred to me to desire that. It just wasn’t something we did, which was unfortunate because before this person was in my life I was always into cuddling. I loved sitting on the couch being held or holding.

The relationship ended on a really bad note. I thought I was in a monogamous relationship. I wasn’t. Worse yet, it turned out my best friend was the other woman. I was not only brutally crushed by his dishonesty and the lack of affection that I had received, but I was crushed by her betrayal. I lost not only what I thought was love, but I lost my best friend, all in one fell swoop.

Flash forward a few years and my long time boyfriend and I had been together for a while. Due to all the problems that I went through with the previous boyfriend I was having to work through my issues, but promising to keep my current relationship in tact. I didn’t want another failed relationship and I didn’t want it to be my fault.

It was in all this self-reflection I realized I had become what I despised in my previous partner. I wasn’t affectionate. I didn’t kiss my current boyfriend much. I didn’t hold him or like to be held by him. I was a completely different person from whom I was before my previous relationship. How could someone change me so fundamentally that I was no longer the person I used to be? I had become the person I disliked more than anything.

That is when I found Cuddle Party and through it, Cuddlist.com. I vowed then not to allow myself to be the person that my previous relationship had created, but to find my way back to the person I used to be. I wanted to be the cuddle guru that I had been hiding away and I had to work to find her.

It didn’t take long. Researching Cuddle Parties and learning about skin-hunger I was more than happy to get back to who I was. I learned to be affectionate again. I learned people need to be held in a non-sexual way. I even learned that being touched didn’t have to be sexual. These things brought me back into the scope of who I am today.

I am living proof there is life after skin-hunger. I give everything to my clients because of this. I want them to know it isn’t the end. Things will get better. No matter their reason for calling in and getting a hug, a cuddle, a hand holding, etc, it gets better.

It saddens me to hear people say that we are their last hope. They were wanting to call in because they were about to do the unthinkable and take their bright light away from this world. We, the fortunate Cuddlists, have the ability to help and I am so thankful that I am a part of the Cuddlist community. It saved not only my sense of self, but my relationship and in some ways, my life. It brought me back to me.

Bri Espindola is a Professional Cuddler based out of Dallas, TX. Bri has a degree in Psychology, certified in First Aid and CPR, an intimacy coach and a former massage therapist.

“A session with me is going to be about helping you become the best you that you can be and get what you need out of it. Not only am I a Cuddlist, but I am training to facilitate Cuddle Parties. It is my goal to help those that prefer one on one session, as well as facilitate for those that would prefer the less intimate group environment.”

You can book a session with Bri here. 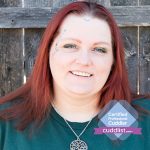