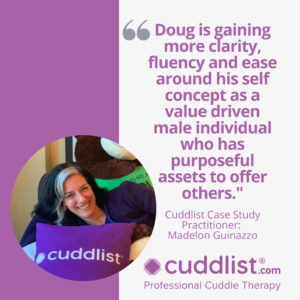 1. Doug (not his real name) is a 58 yo white male. He has a bachelor’s degree with technical training and is employed full time with benefits as a help desk agent. He is divorced with no children and currently lives alone.

2. Doug presented with an issue of having acted on a craving for human touch by going to the only place he knew of to get it, a “massage parlor” where massage with genital stimulation is available. Client felt a subsequent painful sense of emptiness and self recrimination. It triggered a fear of returning to self destructive behavior patterns that had been held in check, but from which he had previously relapsed. His trauma therapist suggested Cuddlist as an alternative. She knew nurturing safe touch is what Doug was seeking. The therapist made the initial contact. Based on my response, she felt confident recommending that her client contact me to set up a session. Given her recommendation the client felt comfortable having an initial session with me.

3. Doug has been receiving one hour Cuddlist sessions every week or two for one year. He initially started therapy at Northwest Center Against Sexual Assault then followed his therapist when she went into private practice. He’s been seeing her for almost 4 years for 2 sessions weekly. He also attends a weekly AA support group and a weekly men’s survivor group.

Doug’s diagnosis is PTSD. Upon first starting therapy, he exhibited a high degree of dissociation, depression, anxiety, sexual concerns, intrusive experiences, defensive avoidance, and tension reduction behavior per the Trauma Symptom Inventory. Through EMDR and IFS (Internal Family Systems), he has reduced all his TSI symptoms and has been able to become more comfortable with feeling his emotions. Current treatment focuses on EMDR with distressing past abuse memories.

4. Cuddlist sessions do not set goals in the way that therapy does. We do not diagnose so we do not have a formal service plan. The method of operation is to always have the client making choices and identifying how they would like to feel or where they would like to go. We may set intentions with the client that can change from session to session. With Doug the goal is to be present with one another and go at his pace. This is an intention Cuddlist practitioners have with all of their clients. No other goals were necessary.

5. At his first session Doug divulged his history of alcoholism including a relapse in which he attempted to die by suicide by drinking enough to end his life. How I received this information played a crucial role in establishing trust and security to proceed. Over time client revealed a history of childhood sexual abuse. He has felt safe enough to share with me that he was sexually abused by his grandfather over a period of time in which he, his mother, and his older brother were dependent on him. His brother knew of the abuse and also felt powerless to intervene. Additionally he has suffered physical abuse by his mother, father, and eventual stepfather as well as verbal/emotional abuse by his mother and grandmother on top of other sexual abuse instances by peers when he was in middle school, bullying in high school, and what could be defined as physical and emotional torture by his stepfather and a friend’s father as an older teen. In short, Doug had never experienced safe touch as a child or adolescent.

Telling his spouse about the sexual abuse had led to the end of his marriage. Being able to tell someone in a safe, non-clinical, interpersonal context where it was received with compassion and acceptance over time with secure attachment has contributed to a shift in which he can imagine himself in an intimate partnership, whereas previously he could not.

For the first 9 months or so we had a practice of Doug reporting back the next day in which he would take time to process and realize in hindsight what was happening for him. Being able to identify and communicate it reinforced the sense of being authentic and having it received with safety. Over time that has ebbed away and this practice is no longer needed. He is authentic in real time with no delayed realizations.

The belief that he is “too much” for others or that he could not share meaningful personal details without an agenda (even unconsciously) to manipulate is one of the things our sessions have been recontextualizing for him. Receiving affection and focussed positive attention without expectations or demands has provided an opportunity for him to experience himself in a new way. Doug is more at ease with himself and has a more positive image of who he is as a friend, a confidant, a supportive presence, and an ally. He has a more realistic perspective of the positive impact he has on others and he has less anxiety about having a negative impact. He is more optimistic about his ability to follow through on his intentions. He is feeling more ease and a positive self image about how he contributes to others in his survivors group and with AA sponsees.

Finally, Doug is gaining more clarity, fluency and ease around his self concept as a value driven male individual who has purposeful assets to offer others. He has pursued a passion to learn more about men’s rights activism and has shared his story (read here) in online forums to encourage other trauma survivors to find the effective help that is available to them and to stay positive in the face of discouragement and even despair.